Mcdonalds Coming to Woolworths as Finance Director is Replaced 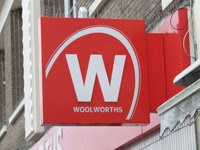 Amidst the most difficult economic circumstances for thirty years, Woolworth’s Chief Executive, Stephen Johnson, who took the reins this September has been busy developing his strategy to turnaround one of Britain’s well known high street brands while reducing the Company’s debt by selling unprofitable stores to Tesco. At the same time Johnson has had to contend with the distraction of continual bid speculation.

Woolworth’s battered shareholders, who have seen the value of their stock, plummet from 20p a year ago to 4.1p this morning, and will be hoping that Stephen Johnson’s latest salvo in his battle will save Woolworths from a further mauling by the markets.

Tom Orange, private investor and general manager has held Woolworths through their recent difficulties says: "I have been an investor in Woolworths for too long to count and have seen the share price fall to the paltry amount of 4p. This has clearly damaged the reputation of Woolworth’s management.”
In August the board rejected a 50m bid for the retail arm of Woolworths Group plc from the founder and Chief Executive of the Iceland supermarket chain Malcolm Walker. Despite further talks in September the Walker bid is understood to have cooled. The company has also been linked with property tycoon Aredeshir Naghsineh who is believed to be interested in developing Woolworth’s 815 store portfolio, or even taking on the company himself. Naghshineh, who already owns 10.2% of Woolworths founded Targetfollow Property Holdings in the 1990’s and is now one of the largest privately owned property investment companies in the UK. Add to that the revelation earlier this month that Alan Sugar, star of the BBC’s hit television series The Apprentice, has bought a chunk of Woolworths shares and the likelihood that the Bauger Group retail empire (which includes a 10% holding in Woolworths Group plc) could fall into the lap of billionaire retail guru Phillip Green and the situation starts to look interesting indeed.

By cracking the whip on the ground and making some big changes at the top the new CEO at Woolworths does seem to be making progress. I put it to Woolworths that, while Stephen Johnson appears to be is getting on with running the Company, to private investors it seems he doesn’t to care too much about what happens to the share price? A spokeswoman for Woolworths said: “That’s all he can do (Johnson). We can’t control the share price, but we appreciate the importance of providing shareholder value.”

Despite the collapse in the share price I am told that, since Stephen Johnson took the helm, stores such as Altringham, Leeds and Manchester, for example, are improving.

“I asked a floor Manageress how things were and she told me that everyone at ‘grass roots’ level in the stores appeared more motivated and excited by the changes that are happening under Mr. Johnson. She actually said and I quote ‘I was told at a recent meeting, that we would end up selling frozen food if we didn't all pull our weight and aim high.’ says: Tom Orange.

With paltry stock volume changing hands in the city this morning investors are currently holding onto their shares hoping that the New CEO will turn Woolworths around. “There is a saying ‘work smarter not harder’ Woolworths are clearly doing both simultaneously and the bidders are getting wind!” says long term shareholder Tom Orange.

A spokeswomen for the company this morning confirmed that Stephen East is to step down as Finance Director and that Robert Mcdonald, formerly the Chief Financial Officer of Punch Taverns plc is to replace him, adding: “Stephen will be remaining at Woolworth’s for a couple of months to do the hand over”.

Today is the first day the Government dared to use the "R" word
Posted by Anthony Bounds | Blog at 11:40:00 am