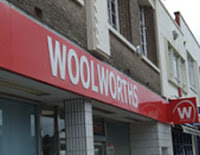 On the 1st September Stephen Johnson, the former boss of Focus DIY is due to join the board of Woolworths Group plc in the hope of turning around a business that despite nearly £3 billion of turnover makes hardly any profit.

Johnson’s job as Cheif Executive of Woolworths Group will not be made any easier by the cheeky offer for the company’s retail division by one of the great talents of retailing Malcolm Walker looming over him. Johnson’s task will be made harder still by the fact that the approach by Walker has the backing of Woolworth’s largest shareholder Bauger Group who appears to be making a habit of investing in ailing UK retailers.

There is also speculation that Aredeshir Naghsineh property tycoon and developer will join the Walker consortium to carve up Woolworths..........

The shares at midday today are currently marking time at 7.1p piece