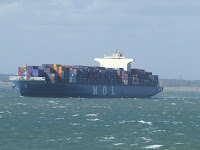 The amount of goods that the UK buys from abroad exceeded that sold by a record £8.33billion in November sending the pound tumbling

Paul Dales, economist at Capital Economics said: "The pound is now about 30% below its peak. But with global trade flows subdued, this is unlikely to make much difference, at least in the near term."

The news of the UK’s worst ever trade gap is particularly disappointing given that the value of sterling had fallen so far against the Euro which should have helped manufacturers sell more cheaply across the channel. The Office of National Statistics (ONS) also revealed that the trade imbalance with non-European countries was at a record low of £5.30bn.

Despite trade, taken as a whole, yet to reach rock bottom the exchange markets sold the pound yesterday, taking it down, at one point, to its lowest level since 1981 and closing at a seven year low of $1.37 to the pound.

While, in theory, sterling’s weakness should help manufacturers export abroad, the reduction in costs is being dwarfed by the collapse in demand as the economy shrinks worldwide - particularly in the US.

The deteriorating trade gap in goods are adding to fears that output released tomorrow will confirm a second consecutive quarter of negative growth and a UK economy officially in recession.

On the road to recession
Posted by Anthony Bounds | Blog at 3:14:00 pm