Years of Refusal | Morrissey’s Most Powerful Album Ever 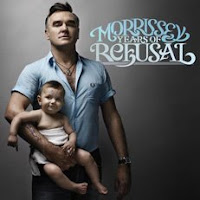 Listen carefully and you can experience your own death...

On the 16th February Morrissey released his new Album Years of Refusal which, despite the British music press, entered the UK chart at No. 3.

The themes weaved into the Years of Refusal of love, death, loneliness and loathing will be familiar to Morrissey fans. The lyrics, as expected, are up to the job, gently drawing you then punching you in the face until you wake up and listen.

Morrissey informs us from the start that he is doing “very well”, but then abruptly admits in Something Is Squeezing My Skull, that the engine that drives him is firing on all cylinders.

All human frailty is here from mourning life as “nothing much to lose” in Mama lying softly on the riverbed to the elusiveness of love in Black Cloud. The joyful vibrancy of I’m Throwing My Arms Around Paris is an obvious choice for a single, which despite the clever lyric, allows you to sing-along as easily as any of the bone-headed nursery rhymes routinely receiving awards at the “Brits”.

The urgency of life revisited in You Were Good In Your Time is cathartic and moving and counseling that death can be both a wonderful and terrible thing. Listen carefully and you can experience something approaching the sound of your own death. “Let your heart rest and lay back your head”.

As if to alleviate the distress caused by the lyric Morrissey ends by assuring us that he is absolutely fine. He leaves the best until last with the defiant I’m OK By Myself, a tale that leaves us guessing who it is that Morrissey does not need. “I don’t need you or your morality to save me”.

One final word of warning, unlike the more university inspired bands like Coldplay and Radiohead, don’t expect to get Morrissey first time. But you will eventually.

The Years of Refusal is a story in song, poetry turned to music provided by a talented group of musicians loyal to the cause that is Morrissey. So ignore the sniveling assassins crayoning their opinions into the pages of the British music press, be safely alone for an hour, close your eyes and breathe in the might of Morrissey’s most powerful album yet.