Agent Alert: Here are my books in a nutshell:

There are five books and one idea to have a look at here. Two of the books, the comic novel The Expensive Cravat and the text book, Defining Alternative Media are ready to go and just need a final edit. Quotilucious, is a semi-serious book of factoids and, in terms of it's content, is also near completion.  My popular history book, Did Hitler Eat Strawberry Cake? is mapped and the content organised, is half-way finnished. Before going the extra mile on Did Hitler Eat Straberry Cake? I am looking for an Agent.

Now see if you can find the idea at the end and message me if you think it's funny...

Book One | Fiction | The Expensive Cravat 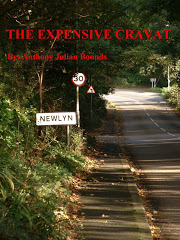 The Expensive Cravat is a 68,500 word comic crime novel set in the 1980s that was triggered by my accidental exposure to the English Middle Class and their silly ways... You can read an extract from Chapter 1 - Sitting up here.

The Expensive Cravat is entirely fictional. Any resemblance between real people and my imaginary characters is, probably, at some unprovable level, deliberate.

Here's another extract from the book:

Cunning creatures Foxes.  No human, no matter how sly, could have got away unnoticed like that and, in the peace of early morning, Joe speculated what possible motive the Fox could have had for doing such a filthy thing?  Was Mr Fox simply marking his territory, or was Johnny unlucky?  Frankly, just to leave a scent, the amount released seemed excessive and after some idle thought, Joe concluded that the Fox probably did it for his own amusement.
Book Two | Non-fiction | Did Hitler Eat StrawberryCake?

If you're an agent or publisher of popular history you might like to take a look at Did Hitler Eat Strawberry Cake? the first of a series of books that takes an imaginative look at history’s most frightening tyrants.

Written for a popular audience, Did Hitler Eat Strawberry Cake? is peppered with interesting facts and nuggets of information that are communicated to its audience in a range of publishing styles.

While Did Hitler Eat Strawberry Cake? is emphatically History light, the research upon which it is grounded is extensive and is derived from: distinguished biography, academic journals and historical and media archives.
Did Hitler Eat Strawberry will be promoted by this blog and my in-house Social Media Marketing service the Writers Guardian that has over 6000 reader and writer followers.

If you're a publisher, or agent interested in publishing a book Defining Alternative Media please message me...

Here's the first 5 pages in PDF

In the spirit of Alternative Media I set-up the Student Guardian. The sites purpose is to encourage wider partcipation in journalism at the same time as providing students with useful information to help them through university. In a nut-shell the Student Guardian gives new writers and journalists a chance to get their articles published without having to mould their writing into what's expected of them by vested interest lurking in the mass media.

If you are interested in Partcipatory, citizen, or Alternative Journalism you can contribute to the Student Guardian here and read more articles from the Alternative Media News community too.

Written with stocking fillers in mind, or as one of those little books you pick up at the checkout in book shops, Quotilucious is jam-packed with Fun-facts and Quotations you won't find anywhere else on the web...

Quotilucious would also work well as an App too, popping out randomised fun-facts and quotations. Already tested on the web Quotilucious attracted thousands of followers on Twitter, has its own Blog and Facebook and webpage...

This is the first of a series of posts promoting my forthcoming book: Sh*t views of Truro Cathedral.