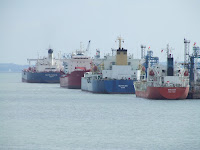 With over 85 million barrels of oil gobbled up worldwide every day escalating oil prices are badly hurting the world economy and Britain’s gas guzzlers more than most.

According to figures released this month by BP’s statistical review of world energy global oil production fell by 0.2% to 81.5 million barrels per day (mb/d) in 2007 while global oil consumption grew by 1.1% to 85,220 mb/d. The simple fact is that production is slowing at a time when the demand for oil is growing resulting in an inevitable steep rise in prices.

With unemployment climbing this week to above 1.6 million, economic growth grinding to a halt and inflation expected to remain above 3% throughout 2008 Britain is in the grip of a good old fashioned oil shock. “Recession in the West may not provide relief on prices. There is increasing demand from countries such as China and the Opec countries, whose consumers are cushioned against rising prices by heavy subsides” says David Strahan author of “The Last Oil Shock” - A Survival Guide to Imminent Extinction of Petroleum Man (2008).

As demand rises and production falls the oil producers will naturally favour their domestic markets pushing up the price of oil. "Big oil producers will increasingly divert exports to home consumption, Opec, Russian and Mexican exports are expected to fall by 2.5 million barrels per day in the next five years, which could help push oil to $200.00 a barrel." says Strahan.

Just as in 1973 and 1979 the oil crisis has lead to rising costs at the factory gate that has increased the cost of living to a point where output and employment falls and the economy stagnates. If Strahan is right the consequences for oil dependent economies such as Britain’s will be devastating.

Few will escape the ravages of the 2008 oil shock. Motor manufacturers will find themselves increasingly incapable of selling vehicles to motorists unable to afford the fuel to power them. There is also little doubt that cheap flights will continue to dwindle as surcharges rise to cover astronomic rise in the cost of fuel. Closer to home, the cost of heating oil has doubled in the last twelve months so we are likely to see more and more roof top windmills in the run up to the 2016 zero carbon deadline for burning oil in all new houses. Food prices will go on rising as transport costs increase and motorists continue to burn food (vegetable oil) in their cars to escape fuel duty.

“There are currently 98 oil producing countries in the world, of which 64 are thought to have passed their geologically imposed production peak, and of those 60 are in terminal production decline” warns oil specialist David Strahan, but are there any winners of the 2008 oil shock? If production is peaking at a time when the emerging economies are screaming for more oil those owning the worlds most valuable of resources may need additional security apparatus to protect it.


This article can also be read at money.co.uk
Posted by Anthony Bounds | Blog at 1:36:00 pm