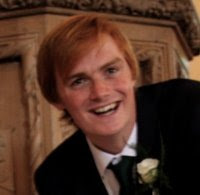 Dr. Robin Kirby is a man completely at ease in the college environment and it’s not hard to see why when you consider that he has lived and breathed University life since 1996.

“I have spent so long either studying, or working at University it’s what I am now really – it’s become my identity.”

Sat relaxed in the college refectory he explains that, as Bursary Advisor at University College Falmouth, with a £1 million budget at his disposal, he can now help others succeed through university as he has.

“Sometimes life gets in the way and student finances become very strained - I know what that’s like.”

Born in Truro Robin grew up in Cornwall on the Helford River, did well at school and accepted a place at Royal Holloway, University London. Equipped with a first class honours degree in English Literature Robin won a scholarship from the Arts and Humanities Research Council to study for an MA in Shakespeare for which Robin was awarded a distinction.

“I took a year out after my MA in Shakespeare – I wanted a change. I did some temping in telecommunications which, as it happened, turned out to be at very interesting time – it right in the dot-com bubble”

It may seem like an impossible link from Telecom’s to Time Vision and Space in Shakespeare’s Romances, but on closer examination they are closer than you might think.

“It seemed to me that simple phenomena like Time, Vision and Space were linked in Shakespeare’s late romances.”

Confusing it may be, but like anyone who has really mastered their discipline Robin was able to crystallize his marathon five year study of Shakespeare’s The Tempest, The Winters Tale, Cymbeline and Pericles into something more easily digestible. Robin’s PhD lives amongst other distinguished theses in the UCF Library at Woodlane,
Falmouth and is alluringly entitled:

Quite apart from enhancing understanding of Shakespeare’s Romances the thesis questions and confounds the prevailing paradigms of Space, Vision and Time. Robin jested:
“Unfortunately you don’t get paid to read Shakespeare all day, be nice wouldn’t it? You have to have something original to say.”
Using textual scrutiny and detailed historical enquiry Robin’s thesis illuminates how the development of the microscope, sight glasses, telescopes, binoculars, and the like were represented in the late plays and employed by Shakespeare to increase the playwright’s ability to give expression to ways of seeing.
“Shakespeare, in these late plays, as it seemed to me, was mapping the world in Vision, Space and Time, and it was this that set these plays apart.”
Similarly, the late plays by giving reference to the early telescopes inspired a vision of the earth’s place in the heavens. An earth which in the seventeenth century had to contend with economic changes that would profoundly affect Shakespeare’s audiences.
“Take Shakespeare’s reference to watches and clocks, early time devices – the developmental motivation behind these was business, early artisans needing to measure time – early clocking on!!”
It is truly fascinating how the two hundred page work illustrates how art and science can interrelate. Reading the thesis it would seem that without Shakespeare’s late plays many of those living in seventeenth century England would not have begun to appreciate what was unfolding all around them.
With his PHD behind him Dr Robin Kirby’s main concern is keeping abreast of an ever changing bursary system which is becoming an increasingly hot political potato.

Robin's Current concerns are that students from poorer backgrounds could priced out of education should the cap, currently £3145, be removed.
“If the cap on tuition fees is removed then less privileged students will be discouraged from applying to universities able to charge what the market dictates.”
The worry is that if only those from well-heeled families apply for higher education it will become increasingly difficult to justify the existence of the bursary system.
“There are those who believe that the bursary system in the UK has become more market-led and there are concerns that this may lead to inequitable outcomes – there may be some truth in that.”
The national average for students failing to claim their bursary is around 20%. At University College Falmouth the figure is just 6%. Students from less privileged backgrounds will be hoping that Robin will be continue to be successful in uniting students with their bursaries and seeking out additional funding so they can concentrate on what really matters.
Posted by Anthony Bounds | Blog at 4:46:00 pm